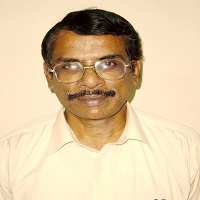 Dr. M. Kalyanasundaram has obtained Ph.D. Degree in Chemistry from Madras University in 1980. He has developed DEPA (N, N-Diethylphenylacetamide), a safe and effective insect repellent against blood sucking arthropods like mosquitoes, land-leeches, blackflies and sandflies. DEPA is currently being used by the Defense forces of India promoted by DRDE, Gwalior. In 1983, he developed a process for converting algae, Enteromorpha compressa var. pinqulata, which shelters Anopheles subpictus, a malaria vector in the coastal villages, Pudukuppam and Nallavadu of Puducherry into paper. It was commercially exploited for making art-paper by Ashram Hand-made paper unit at Puducherry. The continuous removal of algae by fishermen in their leisure time eventually resulted in ‘vector-habitat destruction’ and thereby interruption of indigenous transmission of malaria during 1983-84. He published 85 research articles in both National and International journals and got 3 Indian Patents.

Dr. Kalyanasundaram has guided two students for Ph.D. Degre affiliated to Central University of Pondicherry, and the outcome of their work resulted in the development of pyrethroids for vector control and newer controlled release formulations for mosquito control. During 1994-95, he has undergone one-year advance training on drug design for the development of macrofilaricidal drug for the elimination of Lymphatic Filariasis in Medicinal Chemistry Department, University of Michigan, Ann Arbor with a O fellowship. Also, he evaluated various vector control products under WHOPES for different phases of evaluation.