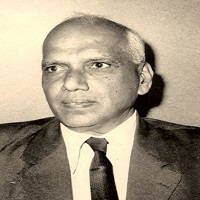 Dr. N. Veeraraghavan was a physician, microbiologist and medical researcher, known for his contributions to the understanding of diseases like rabies, tuberculosis and leprosy. He was a former Director of the Pasteur Institute of India, Coonoor [1947–‘72], and the chairman of the World Health Organization International Reference Center on Rabies. He was honoured by the Government of India in 1967, with the award of Padma Shri, the fourth highest Indian civilian award for his contributions to the society.

Dr. N. Veeraraghavan served as a member of the Indian chapter of the World Health Organization Influenza Center from 1959 to 1972 and the Armed Forces Research Committee from 1967 to 1972. Post retirement, he served as the Director of the ICMR - Vector Control Research Center, Puducherry from 1975 to 1977. The Centre started functioning from a rented building. Dr. Veeraraghavan created laboratory facilities one each for Filaria, Genetics and Ecology, besides colonization of vector mosquitoes. He encouraged studies on vector biology and behaviour of major vector species. Also, he initiated epidemiological studies on urban malaria by establishing a Field Unit in Salem.